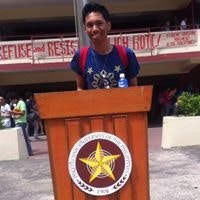 Hello! My name is Jasper Ryan Calimag, a communication student who likes history and sharing information to my families and friends. I like to wander around especially in places in which history is flourishing. I have a jolly nature and likes to make people happy. Seeing them happy makes me happy. :)

The special thing about this trip is all about the adventure we're going to take. Manila is like any other capital in South-East Asia. However, the Philippine capitol is a place of tropical hospitality with a sprinkle of architectural wonders and delicious cuisine. I want to show you the hidden jewels in the bustling city of Manila.

About the creator
Jasper Calimag

The special thing about this trip is all about the adventure we're going to take. Manila is like any other capital in South-East Asia. However, the Philippine capitol is a place of tropical hospitality with a sprinkle of architectural wonders and delicious cuisine. I want to show you the hidden jewels in the bustling city of Manila.

Our Lady of Abbey Montserrat

The first place of our trip is located in Mendiola adjacent to San Beda College. This is the Our Lady of Abbey Montserrat. Built in 1925, the chapel shows a Neo-Gothic exterior, with a Neo-Baroque interior that was designed by Dom Lesmes Lopez. The place is consecrated to the Infant Jesus of Prague. This magnificent monastery is under the care of the Benedictine monks operating on San Beda College and the Abbey's grounds.

Next place of our adventure is the all-steel basilica in Asia, San Sebastian Church. Completed in 1891, the church is noted for the revival of Gothic architecture in the Philippines. The basilica was designed by a Spanish architect named Genaro Palacios. He decided to use steel to construct the famed church after the previous ones made of brick were destroyed by fire and earthquakes along the course of time. This church is the second steel structure in the world after the Eiffel Tower was finished in Paris, France.

Next place is the Ocampo Pagoda Mansion. The structure resembles a pagoda common in countries like China and Japan. Hidden in the bustling streets of Quiapo, the place was commissioned by Don Jose Mariano Ocampo and was constructed from 1936-1941 on the eve of the Japanese invasion in the Philippine islands.

Next stop is a famous Ancestral House in Quiapo commonly known as the "Bahay Nakpil-Bautista." Constructed in 1914 by a renowned architect by the name of Arcadio Arellano, it is now a museum showcasing items of the Katipunan (revolutionary group against the Spanish rule in the Philippines), paintings, among others.

Another ancestral house in Quiapo is the Teotico-Crespo House or commonly known as Boix House. Constructed in 1895, the establishment typifies the Flowers in Trellis architectural style that was common during the latter part of the Spanish rule in the 1890s.

After a splash of Spanish influence, let us see a culture from the East. Considered the largest mosque in Metro Manila, Masjid Al-Dahab (commonly known as the Manila Golden Mosque) was constructed in 1976 under the supervision of former Philippine First Lady Imelda Marcos for the visit of Libya's former President Muammar al-Gaddafi, although his visit in the Philippines was cancelled. The place now serves many in Manila's Muslim community, and is especially full during Jumuah prayers on a Friday. In entering the place, you must wear a veil/hijab (for girls) and no revealing clothes is allowed (for both male and female).

Known as the Basilica Menor del Nazareno Negro, this prominent Roman catholic Latin-rite basilica is home for the shrine of the Black Nazarene, a dark statue of Jesus Christ carrying the cross that many claim to be miraculous. Outside the church is Plaza Miranda, a popular place for political rallies and various types of stores that sells street foods, herbal medicines, magical amulets, and so much more.

Escolta is a historic east-west street located in the old downtown district of Binondo, Manila. The street is home to several fine examples of early skyscraper design in the Philippines.

Established in 1594, Binondo is the oldest Chinatown in the world. It was established by the Spaniards as a settlement near Intramuros but across Pasig River for the Chinese Catholics. This place is the center of commerce and trade of Manila where the Chinese-Filipino influence is widely noticeable.

The walled city of Intramuros is just like a fort similar to the ones found in Europe. Intramuros (Spanish for within the walls), is the oldest district and historic core of Manila. Construction started in the late 15th century and was only finished in the late 18th century. This 0.67 square kilometer lot is where the Spanish rule of the Philippines thrive. This place witnessed several different points in the history of the Philippines along its existence for more than 4 centuries. If these walls could only speak.

National Museum of the Philippines

The place is a historical urban park in the Philippines. Located along Roxas Boulevard, adjacent to the old walled city of Intramuros, it is one of the largest urban parks in Asia. This is an important site in the history of the Philippines. The  Philippine national hero Jose Rizal was executed in this place that instigate the Philippine Revolution against the Kingdom of Spain.

Manila is a dense stew of urban development and historic sentiment, even within heritage districts such as Rizal Park and Intramuros, you won’t be far from a branch of local fast-food giant, Jollibee. Let's wander around the city on a chariot, strike up a conversation with a Manileño, join a round of karaoke or beat an old man at chess.
Metro Manila
1 Day
99.00 USD

When in Manila
by  Ven Haté
Tagaytay is one of the most popular tourist attractions with outstanding scenery and cooler climate provided by its high altitude. Tagaytay overlooks Taal Lake in Batangas and provides one of the iconic views of the Philippines, the view of Taal Volcano Island in the middle of the lake.
Metro Manila
1 Day
149.00 USD

High in Tagaytay!
by  Ven Haté
Walk around Manila's Old walled city with me. I will analyze Philippine architecture, culture and history as we stroll through Fort Santiago, The Rizal Shrine, San Agustin Church and Plaza San Luis. Learn ALL about Manila literally one step at a time. There will be illusions, candy, flowers, and carriage rides. Promise.
Metro Manila
3 Hours
25.00 USD

Walk This Way
by  Carlos Celdran
The special thing about visiting Manila is that you will see a place in which old meets new. A splash of Spanish and American touch of the buildings and structures plus the various churches that symbolizes the Christian faith of the Filipinos can be seen. Also, you will able to see that even though earthquakes, fires, typhoons and even World War II destroyed the beauty of Manila, it would always rise again to inspire and to give hope. So come on and let us visit Manila.
Metro Manila
5 Hours
25.00 USD